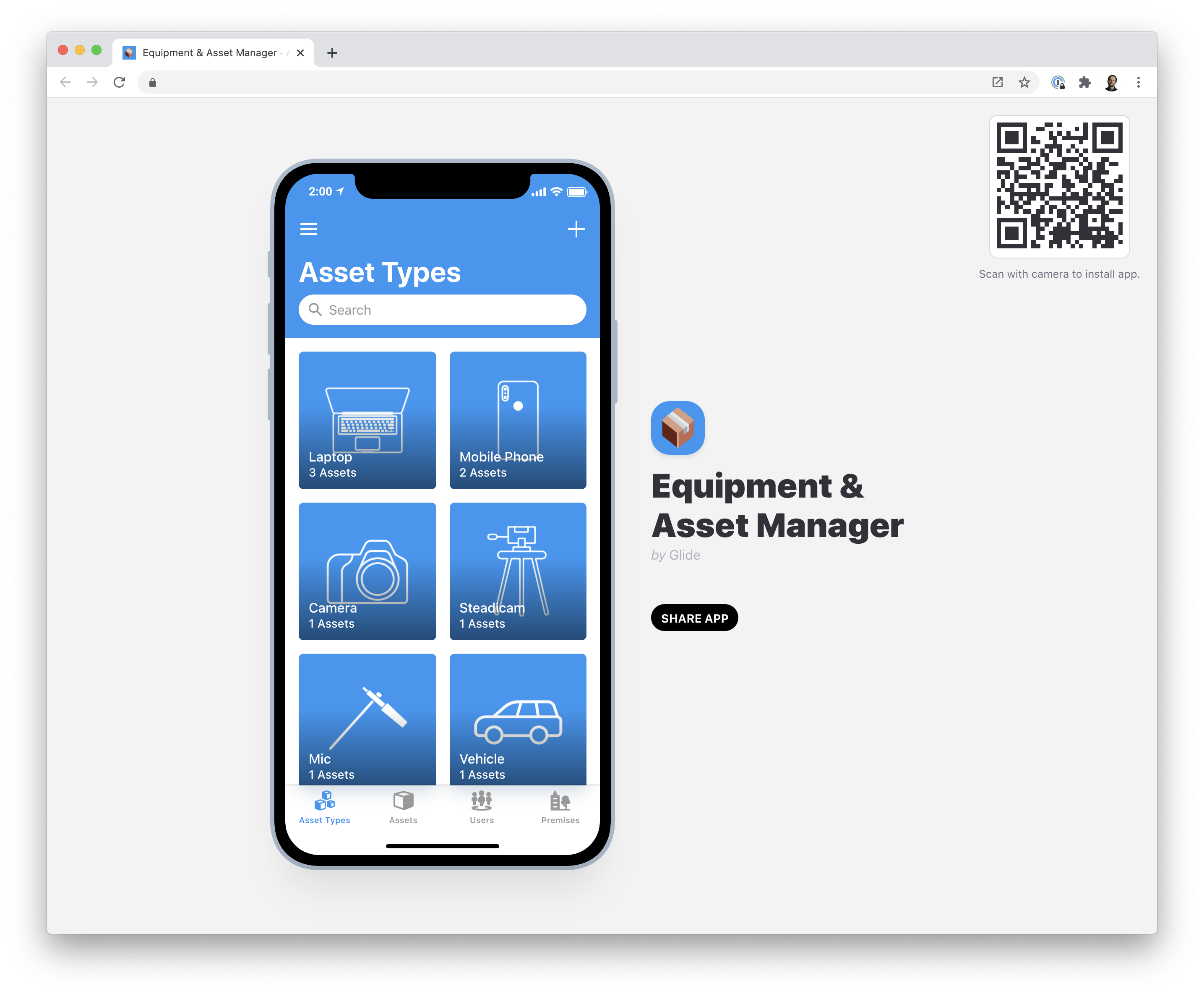 Glide is a NoCode tool for building web applications. These apps use a spreadsheet for their data and they currently support Google Sheets, Excel or Airtable for the data store. Glide creates progressive web apps which very similar to native applications in their appearance. Glide excels at creating great looking applications that require minimal effort. Other tools like Bubble can create just as good looking apps but it requires a lot more work.

Glide creates Progressive Web Apps (PWA) which are apps that run in a browser. However, when run on a mobile device such as an iPhone or Android they have some properties that are more similar to native applications. For example, the header and footer are hidden and the URL bar isn’t shown. These make the appearance similar to what you would see on a native application. Additionally, progressive web applications can be “installed” on a mobile device. Nothing actually gets installed but an icon is added to the home screen and clicking this will open up the browser and the application. Since the apps are not native they cannot be found on the Apple Store or Google Play Store.

Glide does limit how apps using their free tier function on desktop devices. When a user loads an app on a free plan using their desktop computer, a mobile preview appears. So the user is unable to actually use the app unless they load it on their phone. If the app is on a Pro plan then it allows for enabling Tablet/Desktop mode which will allow the app to work on non-mobile devices.

Common Use Cases for Glide

Glide lets you build a wide range of apps. The range of apps is more limited than what you can build in a tool like Bubble but for many use cases Glide will be perfectly suited.

Glide features an easy to use editor that has a modern interface. Glides use of spreadsheets to hold the data makes it easier to manage without having to learn the concepts of database design.

Glide has created a video library to help educate people on the tool. Glide does not provide bootcamps like Bubble does although this may be because of the tools overall simplicity.

Glide runs a Discourse forum with more than 11,000 users. This community is only 22% the size of the Bubble one but this may be attributable to Bubble being founded back in 2012 as opposed to Glide which was founded in 2018. Using back-of-the-napkin math, Bubble has had approximately 5,500 forum users for each of their years in existence with Glide having 3,666 users for each of their years.

Glide also has several Facebook groups that are focused on the tool.

NoCode Guides (this site), was created to help people obtain Glide mentoring. The site allows for finding a mentor and booking a paid call with them.

Glide offers a free tier for individuals but separates out their Business & Enterprise pricing which doesn’t offer a free tier. Interestingly access to the Glide API is only available on the $99 per month and up plans whereas Bubble provides this at their first paid tier level of $25 per month.

Glide allows for extending apps in various manner. The Experimental Code Column allows for using JavaScript to calculate the values for columns. The CEO of Glide, David Siegel, has a presentation on their thinking on how to extend Glide.

Glide has several hundred plugins that provide various functionality. The plugin ecosystem is much less extensive than what Bubble provides. It also appears that all of the plugins are maintained on Glide’s Github account and that users are unable to create their own plugins.

Glide has a large number of free and paid templates and allows for anyone to create and sell templates.

Glide provides an API that lets you add, update and delete data from tables. This feature is only available for the Pro & Enterprise plans. There is also a plugin that you can use in your Glide app to fetch information from an API.

Paid Options for Building on Glide

Glide has a large number of agencies and freelance developers who are specialized in providing solutions using the tool.

Glide isn’t as extendable as using a tool like Bubble. With Bubble you can create your own plugins using JavaScript and this opens up a world of possibilities when building an application.

Glide was founded in 2018. It takes a somewhat unique approach in that it is aimed at creating mobile apps that run as progressive web apps. These apps look visually stunning and end up being easier to create than a tool like Bubble. There’s also a lower learning curve to the tool that comes from having fewer features and being less extendable. Glide appears to have limited plugin development to a select group of people, which one can argue gives them more quality control over their plugins. This is different than Bubble where anyone can create a plugin and this has resulted in many plugins that aren’t very good.

The following is a summary of Glide.