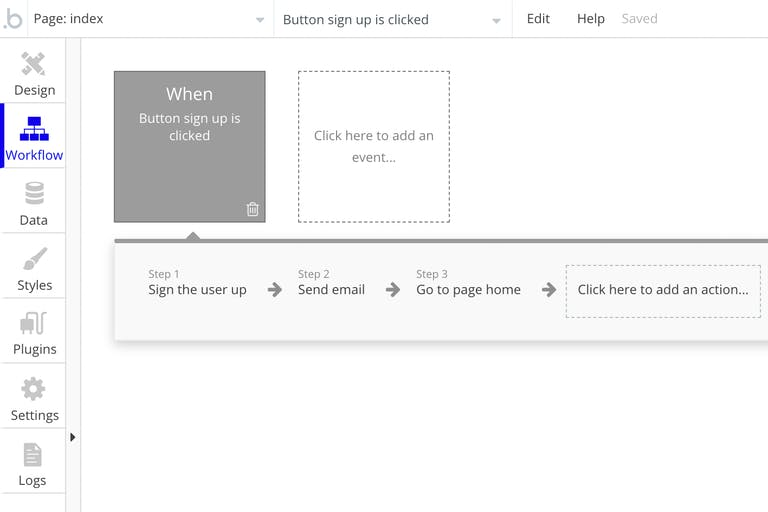 Bubble.io is a NoCode tool for building web applications without code. It is built by Bubble Group, Inc. which was founded by Emmanuel Straschnov and Josh Haas in 2012 and is based in New York. Emmanuel and Josh bootstrapped the company for seven years before raising 6MM from SignalFire and then in 2021 raising 100MM from a Series A round. Bubble is one of the major players in the NoCode space.

Bubble allows non-technical founders and business users to translate their ideas into a web application. It provides an extendable plugin system that lets you build applications using traditional programming methods (in this case JavaScript). Bubble has a range of pricing from a basic plan to dedicated web server plans for those who need more server capacity. In this bubble.io review we provide details on the platform, what its targeted towards and various other information about this very popular NoCode tool.

Bubble allows for building responsive websites and applications that run within a web browser. While the applications can be modified to function as progressive web applications it does require jumping through some hoops to accomplish that and it’s not the primary intended use case for Bubble. Additionally, some people have created mobile apps using Bubble. This involves using a 3rd party service such as BDK to build the native app.

Common Use Cases for Bubble

While Bubble can build any web site and web application the following are some use cases for applications that can be built on Bubble.

The Bubble editor is powerful and consists of a visual interface that NoCode developers can use to create apps without writing code. Bubble has an extensive and flexible editor. It’s the closest you’ll get to the power of coding before going the lowcode or full code route.

There are numerous paid and free resources for learning how to use Bubble.

Bubble Group, the company behind Bubble, offers bootcamps which can be a good way to learn the tool. They say they have had over 1,800 students in more than 50 countries complete their bootcamps. Udemy also has a course for learning Bubble.

Bubble has a very active forum with almost 50,000 users. Additionally, there are Facebook groups focusing on Bubble as well. Bubble probably has one of the most active communities, most likely due to the tools relatively long existence.

The Bubble documentation is extensive and covers everything from the basics to more complex functionality.

This site, NoCode Guides, was created to help people obtain Bubble mentoring. It has since grown to support mentoring on many other NoCode platforms.

The Bubble pricing ranges from free to dedicated instances. There are also discounts available for students, universities and non-profits. Bubble has not been without controversy on the pricing front though. In March of 2022 Bubble announced changes to their pricing which was met on the Bubble forum with lots of pushback leading to the company reevaluating the changes. Given that NoCode in general is still in its infancy, it’s worth paying attention to how a company handles pricing changes.

Bubble is very extendable and has a huge ecosystem of plugins and templates. It also supports integrating with 3rd party services via API’s. Bubble’s extendibility allows you to implement very custom and flexible applications.

Bubble plugins allow you to extend its functionality. You are able to add API connections, elements and actions using the JavaScript programming language. Bubble plugins can be public or private and there is a large ecosystem of both free and paid plugins that can be installed into Bubble applications. While Bubble itself makes some plugins most of the 500+ plugins that exist are created by the community. Bubble maintains a plugin directory of publicly available plugins. Using Bubble plugins can improve the speed at which Bubble developers build their applications as it saves them from having to build custom functionality from scratch.

Bubble plugins cover a wide range of use cases. The following are some examples of the types of plugins.

There are also over 800 templates that you can install (for either free or for a fee).

Paid Options for Building on Bubble

There are a large number of Bubble freelancers and agencies that specialize in the platform. This makes it easier to build and maintain Bubble applications. It also reduces the risk of organizations using Bubble as they can continue to support their applications if their developer leaves.

The flexibility of Bubble comes at a cost of a steeper learning curve. Additionally, creating actual native mobile apps requires a 3rd party tool. However, building mobile apps that also work as standard web pages is likely a niche use case for most NoCode developers.

The following are a few examples of applications showcasing what can be built using Bubble.

The Goodgigs Bubble app is a marketplace for jobs with mission-driven companies. Professionals are sent job opportunities via email.

The Treepoints site was built on Bubble and helps people understand their carbon footprint. It provides a calculator for estimating how a persons activities and life generates carbon emissions. It also provides tools for helping to fund carbon offsetting initiatives.

Bubble is one of the oldest NoCode platforms and should be strongly considered when selecting a NoCode tool. It excels at allowing for a non technical person to quickly build web applications. While there can be a steep learning curve for novice NoCode developers the large ecosystem of educational resources and an active community make it easier to climb the learning curve.